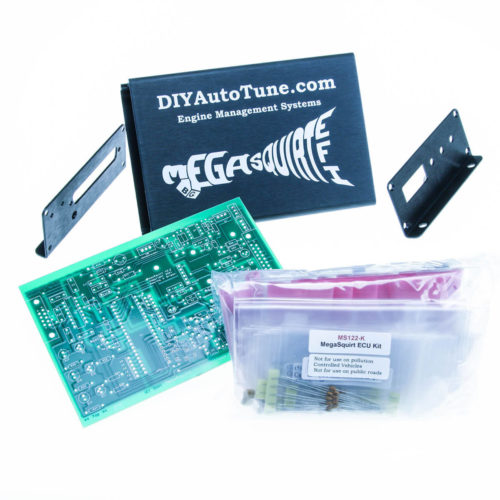 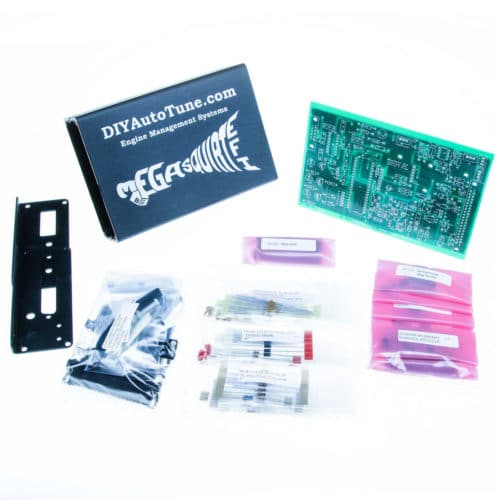 *This product or components that make up this product have reached End of Life.  The ECU is now discontinued – this page is for reference only.

MegaSquirt-I with V2.2 Main Board

MegaSquirt programmable EFI Engine Management System from Bowling and Grippo. Install fuel injection on anything from a single cylinder lawnmower engine to a fire breathing V12, and anything in between! This kit is easily the biggest bang for the buck in the standalone EFI arena. You build it, You tune it, you drive it. The sense of accomplishment is amazing as are the results when you finally get your car dialed in just right after spending who know how long messing around with piggybacks and other ‘hacks’ that just don’t get the job done right. Stop wasting time and money and MegaSquirt your ride! You won’t regret it.

This is our entry level system. It can control two banks of high impedance injectors, and fuel-only control or ignition systems that use a square wave RPM signal and a logic level output signal. Examples of ignitions that work well with this one include GM 7 or 8 pin HEI, Ford EDIS or TFI, Toyota VAST, and Mazda Miata ignitions. If you need to run low impedance injectors, variable reluctor (inductive pick up) ignitions, or direct coil control, or are thinking about stepping up to an MS3 in the future, we recommend starting with a V3.0 board.

This kit includes everything you will need to build your MegaSquirt ECU. Just add tools, solder and time! (Black Anodized Case is included, it’s wrapped up under the PCB in the pic above, EVERYTHING is include to build the ECU) Mod kits for additional hardware features are sold separately.

As with all DIYAutoTune.com un-assembled kits, the quality is second to none. Everything is meticulously organized and labeled to help make your ECU assembly go as smoothly as possible. For example, each of the above bags contains a certain type of part, one with all of the resistors, one with diodes, one with capacitors, etc. Inside each of these bags the parts are further broken down and labeled in their own individual baggies. We even go so far as to put the components in numeric order to make finding them easier. We’ve really tried to think of everything….

What inputs and outputs are provided with this kit?

Does this kit include a MAP sensor?

What firmware does it have?

Can it run a 94 e36 m43b18 bmw engine Will this work for 92 geo tracker 8v. I'm adding a turbo this is my choice for fuel/ignition control Can the ms1 control 1991 na miata ignition? Good evening the documentation delivered with the ecu is her in French. thank you This can work on a 1994 punto gt turbo ie ? can i use this to set up a full injection system in my 93 vw golf (single point injection), drive by cable ? Can this run an ignition system similar to 2JZ ignition? (Igniter based system) Hi I have a 1999 NB Mazda Miata. I have no mechanical or automotive experience. I have heavy experience/expert in soldering. I want to use this ems to run a ebay turbo at between 5 & 8 psi. Is this all I need? Once I have the ems assembled and it is wired to my pc, is mapping the ems to the specific motor/turbo combo (1.8L w/ T3 Turbo.) using the provided software simple/straight forward? Does the ms 1 can work with a 3 cylinder suzuki g10 engine?can it control ignition timing?is it a standalone?