To our knowledge… this is now the world’s SECOND FASTEST 240sx.  We know the owners of the first, they’re rooting for us. 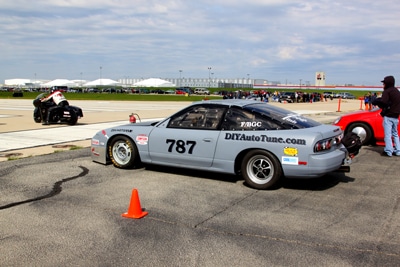 Follow along here as we document each of our outings, post up pics and timeslips, and possibly even document any particularly interesting shenigans we find ourselves getting into along the way….

Starting in late 2013 the plan is to do two of the four ECTA Ohio Mile events each year, as well a Bonneville’s SpeedWeek put on by the SCTA.

Current Records Held as of September 2015

Here’s a complete history of the events we’ve done thus far.  Click any of the headings below for more info, pics, and video!

September 2015 ECTA Ohio Mile – Well, Bonneville was yet again a bust, so we go back to Ohio again to run this 240sx like a scalded dog!  This time with inner fender liners to a mild improvement in aero, and yet another bump in turbo size with a new 83mm turbo from Turbonetics!  Running similar levels of boost and making similar power, but able to maintain it without generating so much heat as had been overdriving that 79mm turbo a bit before.  The new turbo was dialed in for 30-32psi of boost pumping into that 2JZGTE motor with Jerry at the keys on the MS3Pro EMS using our in-house dyno, and was ready to get work done when we showed up to the track.  And it did just that.

We make 5 runs, and accomplish 5 records as well as a new best ever top speed at 217.3913mph in AA/BGC.   That also makes for 13 total records we currently hold in Ohio.

We gained 1 new record and bumped 4 of our existing records.  All five passes this weekend were within about 2mph– 215-217mph range.  This car just does it’s job.  Period.  Granted that doesn’t happen by accident.  😉

BONNEVILLE 2015!!!  — Bonneville had all of it’s major events canceled this year.  SpeedWeek, World Finals, World of Speed.  We would have been there.  But the mining away of the salt and the heavy rains left the track surface unsuitable for racing again this year.  We continue to hope that the salt flats will be ready for us to race… next year?  Please?

June 2015 ECTA Ohio Mile – Another very successful weekend.  We made 6 runs, and took 6 records to show for it.  3 new to us, and 3 we bumped up that we previously held.  We now hold a total of 12 records at the ECTA Ohio Mile with this car.

This puts my personal best speed at 215.41mph as of this event.  Starting to get up there a little bit!

May 2015 ECTA Ohio Mile – With a new 79mm turbocharger from Turbonetics and a patent pending ‘Spool Assist’ system spinning the turbocharger up to make serious boost immediately off the line, the team accomplished 2 records at over 210mph.  One new record in E/BGALT at 210.97mph as well as bumping our existing F/BGC record up to 210.57mph (from the previous 202.24mph).  This makes for 9 records total held by the car as of the completion of this event.

September 2014 ECTA Ohio Mile – 7 more records, 6 of which are over 200mph!  The car was run in the same configuration as the July 2014 event.  We turned the boost up to the max and found that we were pretty much maxxing out our 67mm turbo, so in the off season we plan to increase that targeting 1100rwhp for 2015.

BONNEVILLE 2014!!!  –  The most expensive dirt bike trip ever!!!!  (and somehow still a blast!)  We hauled our car out to Wendover, 2000 miles in a 44′ gooseneck trailer behind our trusty F350 dually.  There had been some rain but the salt was drying out and it looked likely we’d get to race.  Then, as we sit in the casino the night before we’re supposed to setup pits and go through tech inspection–  the bottom falls out of the sky.  You know it’s not good when the casino lights all go out.  Not good at all.  With 12+ inches of water on the course, the event was canceled.  Trying to make the best of it, we pulled the pit bikes out of the trailer and went for a ride in the mountain range surrounding the Bonneville Salt Flats, which was a lot of fun and is beautiful country, and we almost killed John as he was coming down a mountainside.  That’s a funny story as I (Jerry) had just come down the hill, cautiously through the rough terrain of jagged rocks and thick underbrush.  Using lots of brake to navigate the terrain without ‘eating it’.  Then John comes down behind me.  LIKE.  A. BOSS.  Full speed, apparently not braking.  Keep in mind John had ridden street bikes a lot, but only ridden a dirt bike a couple times before this.  I’ve ridden dirt bikes a lot, so I was thoroughly impressed watching him fly down that hill, skipping across large rocks and tearing through the underbrush, looking like he knew exactly what he was doing.  When he gets to the bottom I’m a little confused though–  as he gets off the bikes, THROWS it down hard, and says a few words I don’t normally hear come out of his mouth.  No front brakes and the back brakes just don’t cut it on their own, not down a mountainside.  Of course I laughed hysterically at that point.  😉   (glad he pulled it off without getting hurt!)

Next up… we drag the gooseneck 2000 miles back home. Having enjoyed what adventure we could make of the otherwise bust of a trip.  Next year…. right?

July 2014 ECTA Ohio Mile – WE JOINED THE 200 MPH CLUB!   4 runs total, all on Saturday due to timing light and weather issues on Sunday.   We stepped the F/BGC record up on each of the first three runs.  177.9mph on the 1st run bumps the record ever so slightly.  Then 183.5mph on the second run bumps it again.  Then for the big one, on my thrid run of the day/weekend I ran 202.247mph — the first time I every used all of the throttle pedal.  What an amazing experience!

We completely re-engineered the geometry of the rear 4-link before this meet, and installed wider tires in the rear.  This made a huge difference in the handling of the car and thus was the first time I was able to use all of the throttle.  Next: More boost.  And likely a push truck to help me get through that first 1/8 mile of bogging down due to the Bonneville gears in the car.

May 2014  ECTA Ohio Mile – 4 runs total.  Fastest run was 177mph and we got our first record pushing the Ohio Mile F/BGC record from 165mph up to 177.0956mph.  Car was fairly scary to drive above about 150mph for most of the meet.  Dropping tire pressures in the rear some helped enough to get the record and go through the lights just a bit sideways with the ‘chute pulling me back straight.   We knew there was work to be done before the next meet.  Make sure to check out the video on this run– average throttle was in the 30-35% range!

October 2013 ECTA Ohio Mile – The 240sx makes it’s land speed debut.  3 runs.  Licensed up at 125mph, then 150mph, then our fastest pass showed 172mph on our wheel speed sensors though we tripped the lights at 157mph.  There were light issues that day, so we’re not sure what happened there…