Who’s Your MapDaddy? – MapDaddy 4 Bar MAP Sensor with Barometric Correction
Fully compatible with all MegaSquirt hardware, and with B&G standard and MSExtra firmware.

Ready to rock your ride handling up to 44psi of BOOST!

The ‘MapDaddy’ 4-bar Manifold Absolute Pressure (MAP) Sensor upgrade for the MegaSquirt, with one primary 4-bar MAP Sensor for standard MAP Sensor duties, and a second for realtime barometric correction so that your fueling calculations will stay accurate in the event of an elevation change (mountain runs anyone?). The design was well thought out and is completely compatible with the MegaSquirt-1/2/3 with either the B&G standard or the Extra code variants, also fully supports all major PCB versions, PCB2.2, PCB3.0, and PCB3.57 units. Pretty much any hardware platform is good to go! 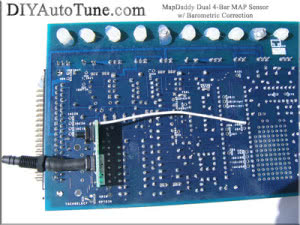 Installation is simple, it just solders right in where the standard MPXH4250 would normally go. One sensor’s nipple lines right up where the 4250’s output would have been, so it will line right up with the hole in your case. A small washer is included for PCBv3 cases that have a larger MAP hole, to be placed on the bulkhead fitting inside the endplate as shown. Then solder the wire from the hole labled ‘Baro Out’ in the corner of the PCB over to JS5 on PCB3 or 3.57 units, X7 on PCB2.2 units. This is the same whether you’re running MS1, MS2, or MS3.

NOTE: You will need about 1/2″ of clearance between the PCB and the case. All of DIYAutoTune.com’s ECU cases shipped since early 2006 have the proper case, some older kits/ECUs may have a different case without the proper amount of clearance. (Look at the endplates, if the endplate with the DB37 is cutout for the shape of the connector it should fit fine, the older cases just had a rectangle cutout for the DB37 connector and will not fit.) 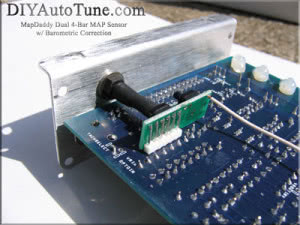 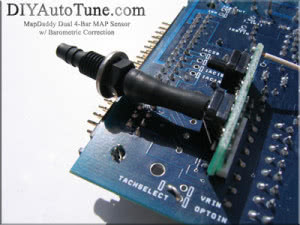 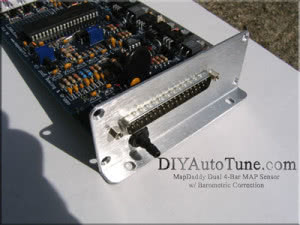 If you’re running a MegaSquirt-II or III that’s all you need to do for the hardware install! You won’t need to do anything with the .22uf capacitor included with the kit.

If you’re running the MS-I with MSnS-E you’ll need that .22uf cap. Just solder it into the C1 holes in between the two MAP sensors. That’s it! If you ever upgrade to MS-II you can remove it then (I tested the capacitor with MS-II/III with no ill effect, though it’s not needed so I don’t recommend it with MS-II and later). 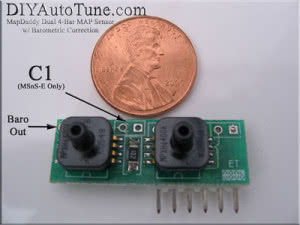 If you’re using MegaTune (MS2 only):

For B&G code:
Open Settings>General and set ‘Barometric Correction’ to ‘Two Independent Sensors’ and set to these values:

Other firmware variants put the setting elsewhere. In MS2/Extra, this is found under Basic Setup -> General, Lags, and you also need to set the Realtime Baro Port to MS2 AD6/JS5. MS3 puts these under Basic / Load Settings -> General Settings.

Burn to ECU and click close. Power the ECU off and then back on.

That’s it! Realtime baro correction is enabled on your MS-II!

Software Configuration for MSnS-E (029 and newer)

That should be it!

Note: With MSnS-E 024s9 and earlier (and possibly some later versions) there is no ‘realtime’ baro correction, the barometric correction exists in the case of processor resets, so that the ECU will get a clean reading of the true atmospheric pressure if there is a MS processor reset. Without this feature the MegaSquirt uses the single onboard MAP sensor to get it’s baro reading in the event of the reset while the engine is running, the value it gets will be WAY off since the engine will likely have a vacuum, or possibly even boost on this sensor at the time. This can case the ECU to think it’s ‘correcting’ your fuel mixture by leaning it out or richening it up when it shouldn’t be. Adding this second sensor for barometric correction will prevent this from being an issue, as it will take a fresh reading from the second sensor, which isn’t under vacuum/boost but is reading atmospheric pressure, in the event of a processor reset and this issue will never be a problem. Resets should not normally occur anyways and if you have a problem with them you should investigate, they can usually be traced to a power surge on the incoming power supply, or to an interference or a power surge on the ignition input wire.

However, with later versions of the MSnS-E code, 026h and above I’ve confirmed, you’ll get REALTIME Barometric correction, so all the time the fueling is being adjusted based on altitude and the resulting barometric pressure. This is the ideal situation, it covers the reset issue as well as all altitude changes.

Can this be used as an external MAP sensor?

What MegaSquirt units can I use this sensor with?