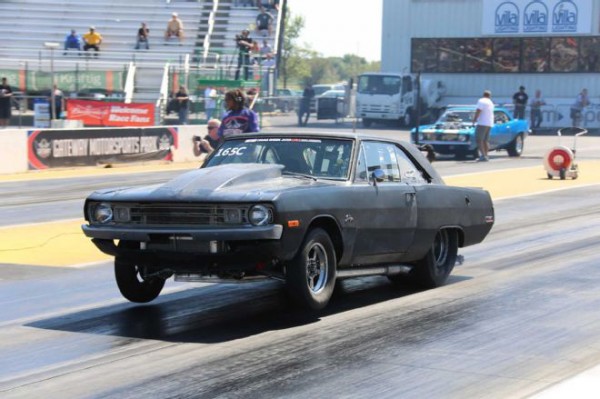 Matt Blasco entered the event in his black 1972 Dodge Dart running a big block Mopar engine with a pair of huge turbos.  This car was rumored to make over 2000hp at the wheels!  He was grouped in a trio of very fast cars including DIY customer Tom McGilton (in the Larson Race Cars built 2013 ZL1 Camaro).  Matt runs an MS3Pro ECU.

On day two in Indianapolis, Matt retained the lead submitting a quicker 7.706 @ 184.35mph timeslip before hitting the road to Wisconsin, but second and third place both closed the gap with quicker ETs than Monday.

On Day 4 in Cordova, IL – on his first pass Matt broke his transmission and was only able to make a 16.98 second pass – he was unable to repair the trans in time to make a second pass, and was bumped all the way down to 5th place in class.   Unfortunately this day would put Matt out of contention for the win, but he certainly kept us on the edge of our seats the first 3 days of the week!  Mat was able to repair the transmission in Cordova, and made the drive back to St. Louis for day 5 and thus was still in the event.

On day 5, Matt ran a stellar 7.719 @ 178.99, finishing fifth in class.   Way to go Matt!!  Running that competitively and finishing the event are very, very impressive feats of man and machine.