Lee runs a 498ci Barton Hemi with Twin 91mm Precision Turbos.  Controlling it all is our MegaSquirt-3 EMS controlling his fuel injection and ignition system sequentially.  He also runs a set of eight of our IGN-1A ignition coils, perfectly igniting that race fuel under boost for maximum power.  (Somewhere in the range of 2000whp!)

Here’s in-car video of Lee’s record qualifying pass.  When he backs the record up (the next morning) he picks up a little more speed with a bit more throttle.

A/BGALT Class = A is 500 cubic inches max engine class, BG = ‘Blown Gas’ or a gasoline engine with forced induction, in this case twin turbos.  ALT =  Altered class, which allows for minimal streamlining of a production body forward of the cowl.

After 11 years of hard work the Black Opel Racing team did it, finally broke the the 202 mph record held by Gail Philips from CA.  Frank Kinney ran a averaged speed of 209 over 2 days to set a new record and earn a coveted Red Hat from the 200 MPH Club. 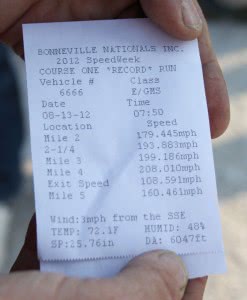 Black Opel Racing runs a MegaSquirt-3 EMS controlling fuel and ignition on their land speed monster.  They’re a great bunch of guys, and I look forward to seeing each and every one of their drivers who have poured years into this car get their ‘red hat’ with it.

Another team running MegaSquirt EFI we ran into on the salt….

These guys are running this lakester in the F/BGL class, with a 2JZGTE Toyota Supra engine and MegaSquirt-2 EMS controlling it all.  They looked us up on the salt to consult with them a bit on a problem they were having which was quickly sorted out (dying alternator, not enough energy to light the mixture at high load).  They made a few 200+mph runs in the car this year but didn’t quite up the record, but they’ll be back!

For more details, pictures and info on Lee Sicilio’s record winning trip to SpeedWeek 2012 and his AWESOME ’69 Daytona Charger, check out this feature article on BangShift.com!

Mike Dusold is a champion in the making!  With two events completed in the Optima Batteries Search for the Ultimate Street Car series, he’s off to an early points lead and being pursued heavily by some serious Corvette competition.  Click the image to view Chevy Hi Performance’s video of Mike in action at the Las…