Support Articles » Technical Articles » Installation Articles » Volvo » How to MegaSquirt Your Volvo 240, 740, or 940

If you haven’t already, please read the ‘disclaimer’ at the top of the parent page here. 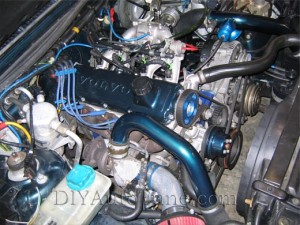 The Volvo 240 and its relatives have a well balanced rear wheel drive chassis and a solidly built engine, but when you start adding boost the stock engine management system can have problems accounting for the extra air flow. Fitting a MegaSquirt to these cars allows you to properly tune the engine for anything from a mildy modified car to an all out turbo drag buildup or IT racer. While there’s a lot of similarities between the 240, 740, and 940 chassis, Volvo used several different fuel and ignition control systems over the years. They did not always keep the electronics the same across all three models, or from naturally aspirated to turbo motors.

Note that our tech ‘Install Articles’ typically focus on the most confusing part of the install process for the end user, and that’s taking control of the ignition system.  This is the part of the process that’s different from car to car and hence we chime in with specifics to help where we can.  For the rest of the details, the parts that are the same on every car like the coolant, intake, TPS, and o2 sensors, see the wiring section at MSEXtra.com.

Applications covered by this article:

This article covers 1985-1989 Volvo 240’s, 740’s, and 940’s with the Bosch LH2.2 Ignition/Fuel control system, as well as other years which have been fitted with the distributor and ignition module this car used. The Bosch Hall effect distributors let you use almost any MegaSquirt variant out there.

The Bosch LH2.2 system kept the ignition control separate from the fuel control (two separate computers), and these used a Hall effect sensor in the distributor that reads a rotor with four vanes on it. This ignition system is pretty easy to take control of. One way to spot the Bosch LH2.2 system in your Volvo is it used an external ignition module (ignitor box). These engines did not have a crank trigger.

Bosch built several different ignitor boxes during this time period. Most of the ignitors installed in Volvos appear to have left dwell control up to the ECU.

If you have an L-Jetronic or LH-Jetronic EFI system, you can simply wire the injector wires that led to the ECU to the MegaSquirt instead. With a K-Jetronic mechanical fuel injection system, you will also need to swap your fuel system over to EFI.

Applications this article does NOT cover:

Many non-turbo 240s used a Chrysler ignition through 1988, with a Bosch fuel injection system. That means a Chrysler Ignition Computer, and a Bosch Fuel Computer, working mostly independently of one another to meet the engine’s needs.  We have confirmed that this system was used as far back as 1982.  You can spot a Chrysler Ignition system by its lack of an external power stage module (aka ignitor) – with the Chrysler ignition system the coil is wired straight to the Ignition ECU (remember these cars will have a separate computer for ignition and for fuel).  It is not clear if the Chrysler distributor works in the same way as the Bosch distributor or not.

Later engines, starting around 1989, used a 60-2 crank trigger. As with the Chrysler distributor, the settings for this one are not as well documented, although MegaSquirt can control this too, the details just aren’t in this article.  Ask us if you’d like help.  At the moment, this article covers the Bosch LH2.2 distributor. Information on the Chrysler and crank triggered setups will be added as it becomes available.

It appears that earlier models may have used a thermal auxiliary air valve for idle control.  Later ones used a pulse width modulated idle air control valve. V3.57 boards need no modifications to control the PWM valve, while V2.2 and V3.0 boards will need a TIP120 transistor, like the one included in our MK-PWMIAC mod kit.

These car can use just about anything in the Megasquirt family, although the V2.2 can limit your injector options unless you use the flyback board. The Megasquirt-I V3.0 (or V3.57) will work well for a good basic system. The Megasquirt-II can provide a better idle if you are running very large injectors, so it can be useful on high boost buildups but not required. You will be able to use your existing sensors except for the MAP sensor which is built into the Megasquirt.

Mod kits discussed in this article:

If you are looking for an assembled unit with the mods in this article already installed, please contact us directly.