Sorry for that mental picture, but that’s how Jim ‘Parish’ Neuenfeldt describes the color of this Turbo 5.3l Chevy powered Fairmont.  And it only takes a glance to see why…  but I think it’s safe to say that no amount of the pink stuff is going to slow down how this car runs…. 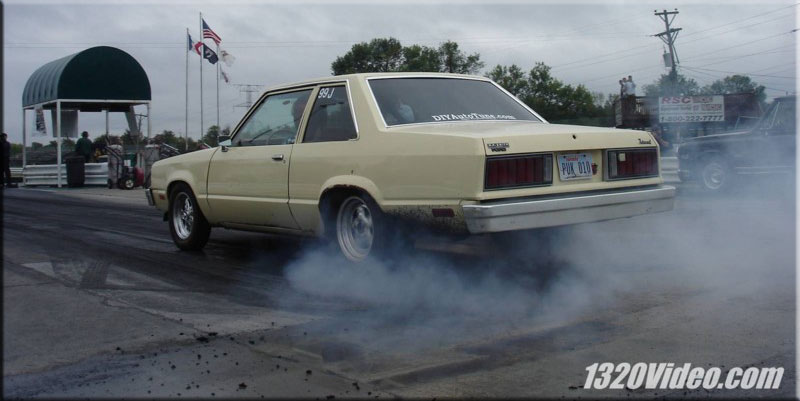 Built by Jim ‘Parish’, John Stevenson, and a handful of guys from Omaha, with the help of a whole bunch of guys donating parts and help, this rustbucket is more of a RustRocket…  taking a class win in Hot Rod’s Drag Week 2007 Daily Driver class with consistent 10.80’s.  Jim is no stranger to DragWeek– take a look at his 10 second 5000lb 4×4 truck here if you’d like, he took a class win at DragWeek the last two years in a row in that truck, this makes three….

You can read most of the details on the car in Hot Rod Magazine, there is a small spot on pg. 52 of the March ’08 edition, and a six-page spread on the car in the April ’08 HRM, but the high points are that it’s running a Vortec 5300 Chevy motor from a Suburban, a generic MP70 turbo, a bunch of ebay-special parts, and a ton of elbow-grease.  How did we get involved here at DIYAutoTune.com?  We’ve been working with  Jim for about 3 years now starting with that crazy truck I mentioned above which also runs one of our MegaSquirt EMS systems, and he came back to us for another system for the Fairmont.  He’s running a MegaSquirt-I PCBv3.0 Engine Management Systemand an Innovate Motorsports LC-1 wideband with gauge we donated to help the cause.