Turns out this was the year for Gary to break the record.  Twice.  In car video of the record run is below.

Monday
Monday morning Gary pulled a 236mph ‘down run’ to qualify for the record, motor was running great, we put the car in impound until Tuesday morning when we’d come back to try and confirm the record.  We did a bit of fine tuning on the fuel map and increased the boost just a bit, no other changes.

Mike Collision took the 1950 Builk Straight-8 for a ride trying to improve upon one of the handful of records he and his brother Richard already hold in this car.  They had a few new tricks up their sleeves this year,  Mike had up’d the boost on the SC to about 8.5-9psi, rebuilt the carb (he has installed an MS for datalogging only at the moment, EFI may be coming), redesigned his headers much more efficiently, and changed the back tire diameter for gearing.  The car was pulling strong, and apparently felt great, right up until it felt not-so-great, and then lost power…  Mike qualified for a new record in the class he was running with a 138mph run, but a compression test revealed #4 was at zero psi so we brought it up top for a peak through the spark plug hole, sure enough there were about 3 nice cracks in the top of the piston.  ‘That’s Racin’ as they say- Mike’s a trooper and kept smiling, and joined the Gary Hart pit crew all the more for the rest of the week.

Tuesday
Tuesday morning Gary pulled off a 238.117mph run.  Car was still running great but still not wanting to pull past about 6000rpm in overdrive.  Time for some duct tape ;).  Nonetheless this was plenty to confirm Gary as the new record holder setting the record at 237.427mph.  Our new goal to beat ;).

Wednesday
Wednesday morning I had come up with some fuel map changes based on Gary’s datalog from the record run on Tuesday.  We loaded those up and proceeded to duct tape every possible opening we could get away with on the front of the car.  Including 1/3 of one of the radiator air ducts, and 1/2 of the other one.  The combination worked, and Gary pulled off his fastest time yet, with a 240.747mph down run qualifying him to step up his own record.  Back to impound we go.  I get back to work on tune map, make a few more minor changes being conservative as it really needs to be a bit leaner up top, but I want to make those adjustments in small steps.  So I take another 2-6% of fuel out at the top end where the car is starting to fall off it’s torque curve and run a bit richer than I’d like to see, and I’m happy with the new map.  We also decide to see what else we can do from a last-minute-aerodynamics mod perspective. We use some flexible rubber to lower the airdam about 1.5″, this should help if it’s stiff enough though I’m not confident in it due to the flexible nature of the material.  We also decide to leave the air filters off on the next run, and tape everything up the same with one exception- only 1/3 covering on both of the air ducts for the radiator.  Data-logs show it got a bit warmer than we’d like on this run.  Nothing dangerous, but we want a bit more airflow.

Thursday
With all the little changes in place hoping to eek out every last 1/10th of a mph, we head back out for the record run Thursday morning.  Gary runs yet another beautiful run, with yet another small improvement, this time running a 241.221mph 5th mile, (which is the time that counts) with a 242.322 exit speed.  Setting the new record at 240.984mph.

MegaSquirt was more heavily represented than ever at Bonneville Speedweek in 2008.  Of course you know about Gary Hart’s record taking efforts details above.  Additionally there was: 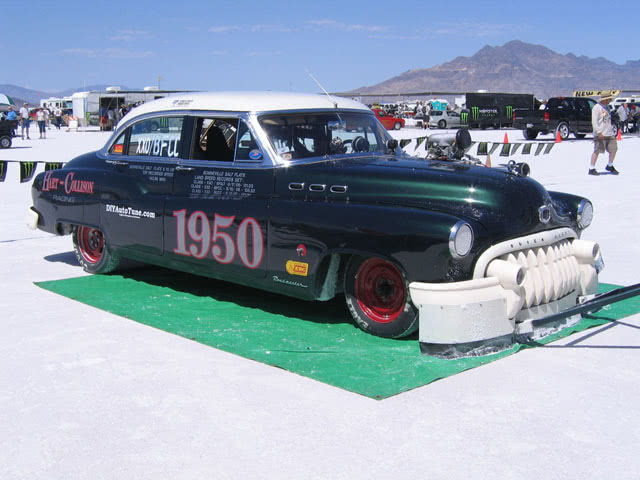 Mike and Richard Collison in Mike’s 1950 Buick.  Still carb’d but running MS to datalog this year.  Engine trouble stopped them after a 138mph run, but they’ll be back next year running full MS controlled EFI and a few new goodies. 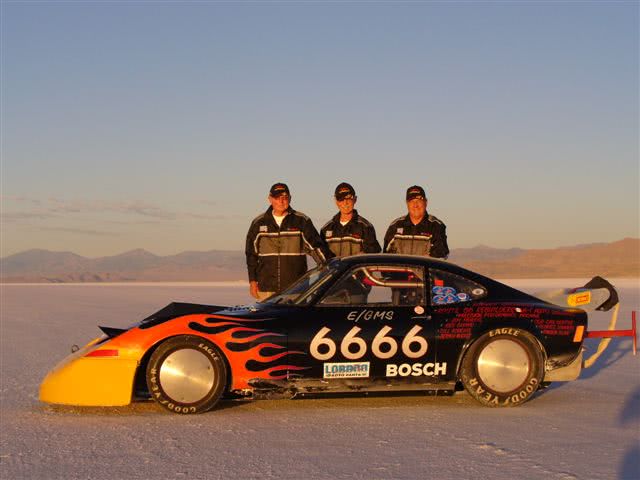 There was another new MegaSquirt’d car on the salt this year– the Black Opal, piloted by Dick Knorr, Frank Kinney, and Larry Ryll went down the course at 189.8mph this year with the help of Marc Piccioni an MSEFI Forums regular (and contributor).  This was a bit shy of their 202mph goal but they’ll be back next year with some gearing changes and further tuning (they started out this year on a bit of a rough tune and tuned on the salt as best as possible).  More info on this car at www.blackopel.com

And then here’s the car that didn’t make it this year unfortunately.  Instructor Al Thomas and the students at Muskegon Community College worked incredibly hard on ‘White Lightning’ – an alcohol burning Fox-body Mustang they’ve been drag racing locally and had planned to take out to SpeedWeek this year.  We helped them out with the EMS and it’s now running MS2-Extra controlling the EFI and 8 COPs in wasted-spark for ignition.  Unfortunately at the last minute they had a catastrophic transmission failure which made the SpeedWeek trip impossible in ’08.  Sorry guys, the car looks great though.  I’ll see you next year ;).

Mike Dusold is a champion in the making!  With two events completed in the Optima Batteries Search for the Ultimate Street Car series, he’s off to an early points lead and being pursued heavily by some serious Corvette competition.  Click the image to view Chevy Hi Performance’s video of Mike in action at the Las…