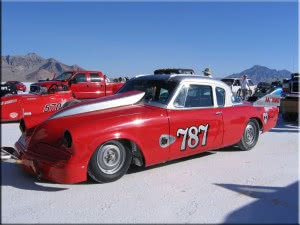 Obviously Speed Week was a blast!  The sun was brutal, as were the vehicles that showed up there to tear up the salt.  Scott Clark (DieselGeek), Mike Higginson and I met up out there along with Gary and Sandy Hart and their mean 53′ Studebaker, and their buddies Mike and Richard Collison who were driving Gary’s 1950 Buick.  A great time (and a bit of sunburn) was had by all.  Mike Collison set a new record in the Buick for the XXO Blown Fuel Comp Coupe class, and Gary qualified for a record but had a freak issue with a coolant hose that stopped him from backing it up.

Finally… the video of Gary’s first ‘warmup’ run at SpeedWeek 2006.  If you can consider 227mph a warmup!  We reviewed the MegaSquirt datalogs after the run and found Gary never got into the throttle more than 29%!!!

So what happened next?  Well, on Gary’s next run he made it to 233mph, but something wasn’t right.  He got back and reported to the crew (that would be Scott Clark, Mike Higginson, Mike and Richard Collison and I) that it seemed to be surging and hesitating up top.  We reviewed the datalogs and found that Gary actually did end up punching the throttle at the top of 5th gear, boost shot to 17.7 psi, and RPMs immediately dropped off.  What the heck?

I’ll tell you what….  the datalogs also showed his coolant temp sensor never reached operating temp, it maxed out at 152 and it should have been up around 210.  It was working fine, though it was reading the AIR temperature that was in the coolant passages after the water drained out!  During further investigation we found that the lower coolant hose had popped off most likely at the end of the previous run, and this 233mph pass had been run COMPLETELY DRY!  Not good.  The motor tightened up when the temps shot up and choked the power down as the internals were stressed way beyond the design specs.  At this point the motor turns over, with a pretty bad sounding clunk.  Gary will do the autopsy soon enough but this ended his fun at the ‘Flats this year.  It’s too bad.  This car has 250mph in it EASY.  In fact I’d guess it’s got 270 or maybe more in it as long as it will stay stuck to the ground!  So while Gary qualified for his record on his first run beating the previously held record, you have to back it up in order to take the record, and we couldn’t make that happen with the engine damage. 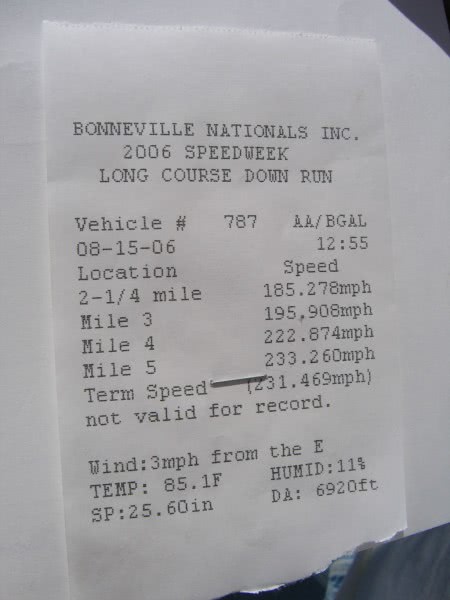 Check out our gallery of photos featuring Gary Hart’s record setting Studebaker and numerous other land speed vehicles from this years Speedweek. 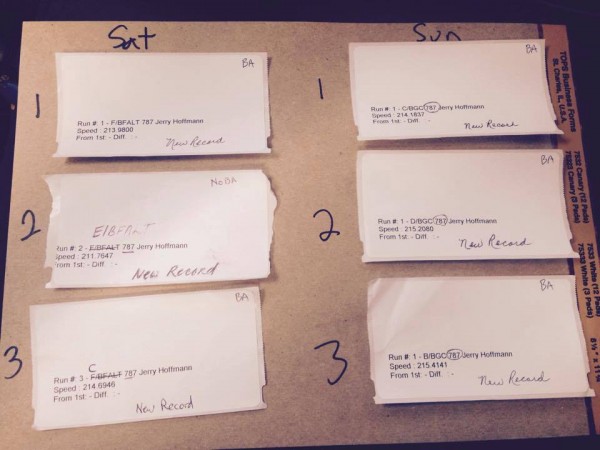 What a blast I had this past weekend! I’ve got more pictures I’ll post up soon, and a video I need to edit together with a new angle (GoPro just a few inches off the pavement mounted up in the grill). In the meantime, here’s all of our time slips from the weekend. 6 records…