The Zeal Engineering Daughterboard makes adding many popular I/O circuits to the MegaSquirt much easier. Ken Culver, one of the authors of the MS2/Extra code, originally developed the Zeal Engineering Daughterboard to make it easier to install MegaSquirt on second generation RX-7s. However, it works with many other engines that use the Nippondenso dual wheel system (such as the Toyota DLI ignition), and has many other potential applications beyond RX-7s. 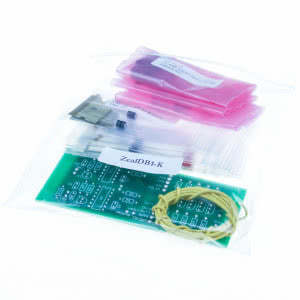 You can use this daughter card with any MegaSquirt version running MS1/Extra or MS2/Extra code. The card fits into the case lid. Here’s what circuits you get on the Zeal Engineering Daughterboard:

Bill of materials for the parts we include with this kit:

There are a number of provisions for tuning the second VR conditioner on this board for other sensors besides the RX-7, though determining the best changes often requires an oscilloscope and some trial and error. If you are not getting good results with the default setup, options include substituting different values for C7 and R15, and not installing the jumper in step 2.

Once you’ve got an assembled board, you can install it in the lid and connect it to the main board with lengths of wire. These connection points are used for all installations:

* Normally, D2 and D3 are not installed in a V2.2 board. Use the holes on the empty slot. D9 is normally installed and would require soldering to the diode, although you will want to remove D9 if using the PWM IAC driver.

On a V3.0 or V3.57 board, you can use the main board VR conditioner for the primary (NE) input, and the VR2 conditior for the secondary (G) input. On a V2.2 board, you’ll need both conditioners. You are best bringing both wires of the sensor all the way to the board, instead of grounding the negative wire. This reduces cross talk noise issues. You can bring the signals in on unused pins on the DB37 (or DB15, in the case of a V3.57 board) and use the appropriate jumper holes on the main board to connect to the conditioner. For example, if you brought the G sensor signal in on pin 25 for the positive terminal and 27 for the negative terminal on a V3.0/V3.57 board, you would connect the lower (positive) VR2 hole to IAC1A, and the upper (negative) hole to IAC1B. Here is where to connect VR2OUT to enable the second trigger.

The upper (positive) VR1 terminal connects to different points depending on the board.

Connect VROUT1 to the following pin:

Testing the Zeal inputs on a JimStim can be tricky (and they won’t respond to a regular Stim at all). The LM1815 will not work with a square wave. You’ll want to use a 12 volt pull up on both the primary and secondary tach signal. For the primary tach signal, you can set the jumper for VR emulation. There is no correspoinding jumper for the secondary tach signal. Instead, put a 0.1 uF capacitor inline between the “2nd Trigger” connection on the JimStim and the VR input on the MegaSquirt. This will give a signal that can trigger the LM1815.

The tachometer output can drive tachs that require a 12 volt signal. We’ve confirmed it works on first generation RX-7s, which would otherwise lose their tach signal if you dropped an FC ignition into one of them. Other tachometers may require different values of R14. The tach driver input is marked IN1, and the output is marked OUT1. The output can connect to any unused DB37 or DB15 pin, while we recommend the following pins as possible choices for input. Be sure you are not using them for other purposes.

While MS2/Extra can also use LED circuits, FIDLE, or JS10 for tach outputs, we expect most Zeal Engineering Daughterboard installations will already be using these, so we recommend picking one of the above pins for tach control.

The Zeal Engineering Daughterboard has three general purpose on/off outputs, suitable for driving a relay or a solenoid with power consumption of 1 amp or less. The outputs are labeled OUT2, OUT3, and OUT4, while the inputs are labeled IN2, IN3, and IN4. The outputs connect to unused pins on the DB37 or DB15 connector. Here are the pins to use for inputs.

Just like with the tach driver, MS2/Extra can also use the LED circuits, JS10, or FIDLE as spare outputs, but they are not recommended as most are likely to already be taken by the ignition circuit or other purposes.