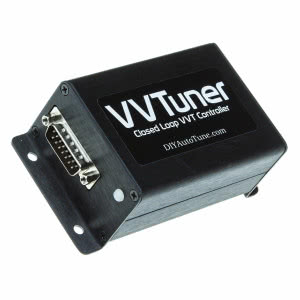 An old hot rodding trick is to change the amount of cam advance to produce small changes in the way an engine behaves. Advancing the cam can add low RPM torque at the expense of high RPM power. Retarding the cam often has the opposite effect: It adds power at high RPM and takes it away at low RPM.   This cam adjustment is always a compromise, improving power at one point in the rev range and hurting it elsewhere.

Eventually, engine designers came up with a way to allow the cam timing to change while the engine was running. That way, the cam can be advanced at low RPM, where it helps power there, and then retarded as the RPM comes up, eliminating any compromise. Moving the cam can also help with horsepower and emissions.

The first variable valve timing systems used a simple on/off switch. It wasn’t long before these gave way to more sophisticated systems that could move to any position between two stops.  While an on/off variable valve timing system is a snap to control with aftermarket electronics, the continuously variable systems are a lot harder to deal with.  You can just control the current running to the hydraulic valve, but at best this would result in cam timing that changed with your oil pressure and temperature.  To get proper control over continuously variable valve timing takes a system that can monitor the cam advance in real time and use this feedback to make sure the cam is where it’s supposed to be.

Our first released model of VVTuner Camshaft Control Module allows the tuner to implement full control over the continuously variable intake camshaft found in the 2001-2005 Mazda Miata. By way of an interpolated 12×12 table referencing engine speed versus engine load, the user can accurately set the desired camshaft angle throughout the engine’s entire operational range. The camshaft angle is accurately rotationally positioned via closed loop control. The result is full user control over the Miata VVT system. Get all the area under the curve without compromise!

Currently, the VVTuner is available for the 2001-2005 Mazda MX-5 Miata only. Other trigger wheel arrangements (including aftermarket trigger wheels for the Miata) are not supported.