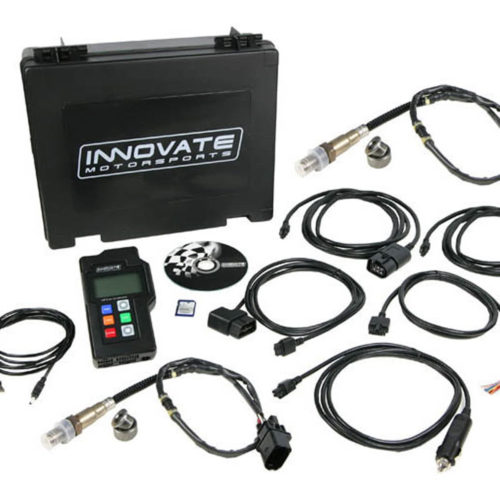 Innovate’s new LM-2 combines a wideband controller, an OBD-2 scan tool, and a data logger, all-in-one handheld package. Like the LM-1 before it, this one monitors the air/fuel ratio with a Bosch LSU 4.2 wideband sensor, and records information to its memory for playback later. Also like the LM-1, it has two programmable analog outputs that you can use to send the information about your air/fuel ratio to an aftermarket ECU like the Megasquirt, or to a gauge or a dyno computer. The one on this catalog page also has two O2 sensor inputs (not pictured).

Innovate gave their data logger a major redesign. They started with an improved and revised version of their “Direct Digital” wideband control circuit for precise measurement. This one compensates for changes in altitude, temperature, and sensor condition. No more just trusting the calibration resistor here – you can recalibrate it as the sensor ages. Innovate added many new features: they moved the data logging memory to a removable SD card (included with the LM-2) so you can bring along more cards if you need a whole race day’s worth of recording. They also added the ability to scan OBD-2 ECUs using either the OBD port or a CAN bus. The LM-2 can log 16 channels of data though the OBD-2, letting you analyze what your stock engine is doing. It can also log data from other Innovate MTS products, allowing 32 channels of data logging in all.

Here’s the full rundown of features:

What sensor is included with this wideband system?

Can I install it permanently in a car?

Can the #3806 single channel model be upgraded to support dual channels?